There’s no need to stop smiling! Father’s Day should be a time for happiness and sunshine, barbecues and laughs. Unfortunately, for a lot of us, we have to deal with abusive fathers and what they did – or still do – to us. While I would love to ignore creepy, negative people, I still have to deal with them, and I believe there are a few of you who must as well, and so I’m here for you! Keep a smile on your face, keep your dignity and good spirit, but remove the Crazies.

A brief background on why I like to help
My father was physically present, but emotionally absent. He allowed my mother to be a mediator between himself and his daughters, and because of that our family was torn apart. My mother – a sociopathic narcissist – lied to him about our thoughts and actions. In return, he beat us. This placed her as the head of the family – exactly where she wanted to be.

“…if you showed a sign of independence as a child they took it as losing control, they must have absolute control.”

The family friend who wrote that in an email to me was absolutely correct. And even now I’m shocked how accurate his words were. I had a choice: live a suppressed life according to abusive, unstable people, or be happy and be what numerous teachers and coaches knew I was: intelligent and very capable.

So after years of therapy, I’m finally at peace and live a very happy life. With the exception of Father’s Day. It’s a constant reminder of how my father was absent during the times we needed him the most. Fathers should be authoritative and help steer the direction of the family. Instead, he handed-over authority to an unstable, manipulative mother. And even to this day, he allows my mother to fabricate untruths about anyone who attempts to dethrone her.

Because of this, I’ve had to completely disconnect myself from my own family. I found it extremely difficult to do, and every Father’s Day that passes is a reminder that I’ve both done the right thing as well as exactly how alone I am in regard to having a family.

If you’re struggling with an abusive father and desperately want to disconnect, these things helped me. I’ve done the following:

1.) Completely cut ties
After years of limiting communication, I finally completely cut ties. I block phone numbers, I block email addresses and I do not give out my mailing address. The psychos in my family needle people until they give in (unfortunately, it has worked on aunts and uncles who have heard entire stories of our abuse).

I refuse to bend. Abuse is still abuse. Even after trying to “work it out” with my parents, they still continue to create fresh ways to destroy their children. As one sister pointed-out, “If it was just that event years ago, I would have forgiven. But they continue to try to hurt me, and for that I’ve had to get them go.” 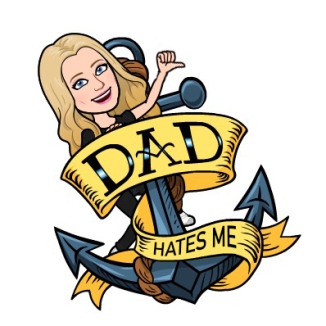 2.) Donate all items from the abuser
I’ve had to donate all memories including clothing, sneakers, shoes, gifts, furniture, jewelry. Basically, I’ve had to create an entirely new life for myself.

Ask yourself, “Who do I want to be? Who have I always wanted to be, but couldn’t because of abusive dipshits?” Think of it like this: there are a lot of people out there who will be thankful that you’re giving away dressers, beds, armoires, earrings, necklaces, photo albums.

This is a war, my friend, and you are going to win. You will be happy.

3.) Put away photos
Old photos are in a box in my closet. I don’t take them out unless my son asks about our heritage. That’s it. Other than that, the box stays where it is. I don’t marinate in old memories because it causes negative energy. I don’t need that. As a collective experience, you want to stay as positive as possible – seeing images of a destructive time in your life will not help. Put them away and keep them there. The only reason I would not completely destroy the images is if you need to send one to a lawyer for an Order for Protection. Hey – you didn’t choose this life, they chose it for you. All you can do is work your way out of it the smartest way possible.

4.) Do not respond to shenanigans
I can’t tell you how many times I’ve wanted to email, reply, or post about how insane my abusers are. There’s gobs of articles and proof on the internet alone about how their actions are insane and possibly illegal.

But responding will only continue the flow of negative energy.

So while it’s clear that these people thrive on negative reinforcement, negative attention, you will not. In order to end the bullying you’ve got to ignore the bully. I find this infuriating because – to others – it looks like the bully is correct if no one corrects them. But ultimately, you can’t reason with a crazy person, and that’s what they are – crazy. So don’t waste your time on them. You’ve already given enough of yourself to their insanity.

5.) Embrace the fact that your father is a putz, and that you’ll have to do it on your own
This is difficult for me because I don’t think it’s that hard to be a good dad. And so the shock is constantly there.

But I try not to marinate in the disappointment of it. I’ve found other people whom I love to show me what good fathering is. I watch them, embrace them and accept the fact that the universe put me in this position to learn something. And so I shall. And so will you.