In the last year I’ve become accutely aware of an increasingly large number of people who don’t want to improve themselves in order to improve their relationship potential. (Not talking about physique, I’m talking about mental stability and maturity.) With an influx of media messages that insist being yourself is okay – no matter who or what you are – its no wonder that folks have used this as an excuse to not make themselves better people when there actually is a need to improve. Because of that, they have no problem shacking up with, or reuniting with losers because there’s no expectation of improvement from either party. With the new millennia and the tsunami of life goals pushed upon the population, it’s no wonder personal improvement has taken a nose-dive.

In a landslide domino affect, the pool of quality romantic candidates has nearly evaporated and good people are now constantly rejected by losers because theyre esstenially too good for them, and the losers dont want to put in a prolonged effort to improve themselves.

So essentially being out of someones league is now a bad thing.

The pool of quality people is shrinking because of this new “If you can’t beat them, join them” theory. This has caused countless stable people to suddenly question their romantic decisions. One man, Jake, had broken up with his boyfriend because of adultary. “I don’t know,” Jake said miserably to me at lunch one day, “Should I give him another chance?” Uhg. How can I answer that?? When you’ve found yourself starving, suddenly scraps look pretty good.

Another friend of mine just asked me to evaluate his dating profile. “I’d venture to guess the vast majority of ladies looking at your profile on this dating site aren’t interested in an intelligent guy,” I guessed.

Where does that leave all of us? You – reading this – where did you meet your significant other? And before you met them did you begin questioning the possibility that there was really someone out there for you?

Some time ago I was on the phone with the last guy I dated – pissed – because he was returning to his problematic ex-wife. “You’re basically telling me that you don’t want a loyal person and you don’t want to be happy…” I seethed. Correct. After the litany of things he professed his ex-wife did, he was still going back. He said it was for the children. Yet if your spouse was that abusive, you should leave them for the children.

Then it hit me like a tennis racket to the face: Some people would rather be with a loser so that they themselves don’t have to live up to a better standard. I did it myself with my ex-husband: I figured he wouldn’t cheat on me because he was a mess mentally as well as physically — no one else would want him. Less work on my part. I was already overwhelmed with life. Yet, I was wrong. I watched him destroy our family, my extended family, his family, his son, and lie in court — only to win in the end.

This has all left me feeling like I’m in a sink hole while the rest of the dating population runs around having fun cheating on each other, lying and causing general misery. 99% of me now believes that the last few decades of my life spent desperately trying to improve myself was a horrible waste of time. 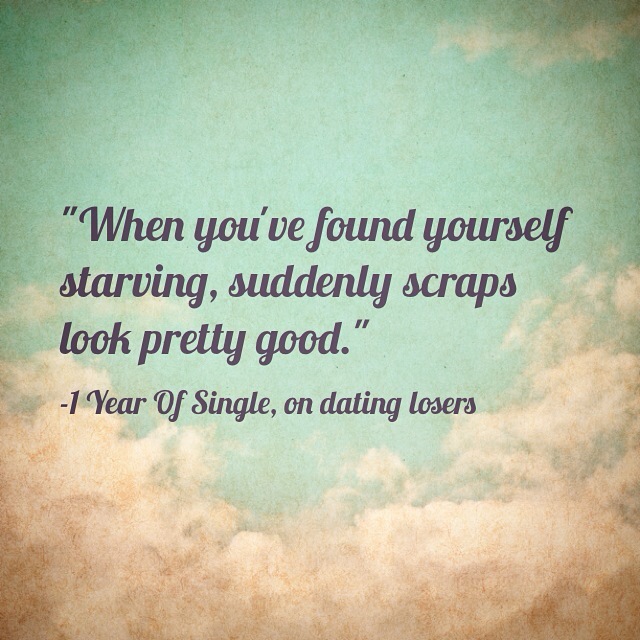